I have a new private writing student, John Nichols. This makes 3, about all I can handle at this busy time.

John graduated from his private high school in May 2009 and won numerous awards for drama, chorus and creative writing. He will attend college in the Fall on a scholarship. He is learning to play guitar and he enjoys singing. He has performed in a number of school plays including Bye Bye, Birdie, and Shakespeare's Henry the Fifth and Romeo and Juliet.

Jon will attend college in the fall and plans to play college soccer.

Is US Likely to Ban Religious Speech?

How will hate crime legislation that favors gay activists fare in congress and the Senate when it certainly will be used against Christian pastors, conservative Rabbis, and Muslim mullahs who tell the truth about homosexuality from their Afro-Asiatic perspectives? That's the $64.000 question!

And what about teachers who teach about the Afro-Asiatic worldview strictly as a matter of information?

The House Judiciary Committee is scheduled to mark-up the Local Law Enforcement Hate Crimes Prevention Act of 2009 this Wednesday, April 22. At issue is whether homosexuals should receive special protection not given to other Americans. If "sexual orientation" and "gender identity" become protected classes, it will be a Federal offense to speak about the Biblical orders of creation since such speech will be interpreted as speaking "hate" against homosexuality.

In a previous hearing, Rep. Artur Davis (D-AL) admitted that under the legislation pastors could be arrested for "hate crimes" when they teach that the Biblical worldview recognizes heterosexuality as the God-ordered pattern of creation.

If you wish to express disagreement with the proposed Hate Crimes Prevention Act of 2009, you might sign this petition: Fight Hate Crimes!
at April 18, 2009 No comments:

HIS Resurrection: A Poem

Here is a wonderful poem about the Lord’s Descent to Hell and Glorious Resurrection (in which we share), by the Orthodox poet Scott Cairns, a professor at the University of Missouri.


Into Hell and Out Again

In this Byzantine-inflected icon
of the Resurrection, the murdered Christ
is still in Hell, the chief issue being

that this Resurrection is of our aged
parents and all their poor relations.
We find Him as we might expect, radiant

in spotless white, standing straight, but leaning
back against the weight of lifting them. Long
tradition has Him standing upon two

crossed boards—the very gates of Hell--and He,
by standing thus, has undone Death by Death,
we say, and saying nearly apprehend.

This all—the lifting of the dead, the death of Death,
His stretching here between two realms—
looks like real work, necessary, not pleasant

but almost matter-of-factly undertaken.
We witness here a little sheepishness
which death has taught both Mom and Dad; they reach

Christ’s proffered hands and everything about
their affect speaks centuries of drowning
in that abysmal crypt. Are they quite awake?

Odd—motionless as they must be in our
tableau outside of Time, we almost see
their hurry. And isn’t that their shame

which falls away? They have yet to enter bliss,
but they rise up, eager and a little shocked
to find their bodies capable of this.


Rise, heart; thy Lord is risen. Sing his praise
Without delays,
Who takes thee by the hand, that thou likewise
With him mayst rise,
That as his death calcined thee to dust,
His life may make thee gold, and, much more, just.

Awake, my lute, and struggle for thy part
With all thy art.
The cross taught all wood to resound his name
Who bore the same.
His stretched sinews taught all strings what key
Is best to celebrate this most high day.

Consort both heart and lute, and twist a song
Pleasant and long;
Or since all music is but three parts vied
And multiplied,O let thy blessed Spirit bear a part,
And make up our defects with his sweet art.

I got me flowers to strew thy way,
I got me boughs off many a tree,
But thou wast up by break of day
And brought’st thy sweets along with thee.

The Sun arising in the East,
Though he give light, and the East, perfume,
If they should offer to contest
With thy arising, they presume.

Can there be any day but this,
Though many suns to shine endeavor?
We count three hundred, but we miss:
There is but one, and that one ever. 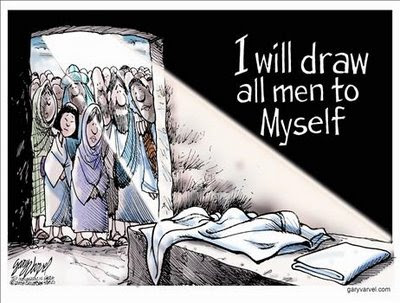 St Ephrem the Syrian on Psalm 1

Blessed is he who has in the Lord become completely free of all earthly things in this troublesome life, and who has loved the one good and merciful God.

Blessed is he who has become a doer of good works and, like a fruitful field, brings forth a great abundance of the fruits of life in the Lord.

Blessed is he who stands at prayer in service to God and, like the heavenly angels, at all times has pure thoughts and does not allow the evil one to approach him, that he may not enslave his soul and lead it away from God the Savior.

Blessed is he who loves sanctity (purity) like light, and has not defiled his body before the Lord with the shameful acts of the evil one.

Blessed is he who always retains in himself remembrance of God, for such a person on earth is like a heavenly angel, constantly celebrating the Lord with fear and love.

Blessed is he who loves repentance, which saves all sinners, and does not delight in sin, that he might not appear ungrateful before God our Savior.

Blessed is he who, like a courageous warrior defending heavenly treasures, preserves his soul and body without reproach in the Lord.

Blessed is he who, like the heavenly angels, has pure thoughts, and who with his lips sings praises to the One who has authority over all that breathes.

Blessed is he who has become like unto the seraphim and the cherubim and is never slothful in spiritual service, who ceaselessly glorifies the Lord.

Email ThisBlogThis!Share to TwitterShare to FacebookShare to Pinterest
Labels: St Ephrem the Syrian

Winners and finalists of the January "Family Matters" competition have been notified, and the Top-25 list is posted! (Remember you can check status of your online submissions by logging in and clicking on My Submissions.)

1st place: "What We Can" by Jeremiah Chamberlin
2nd place: "God and Buses" by Yuval Zalkow
3rd place: "Everything in Its Right Place" by Adam Theron-Lee Rensch
at April 01, 2009 No comments: