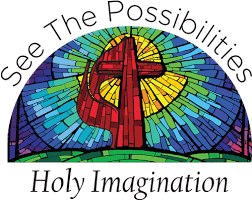 Jared Hartenstein
Imagination is an important aspect of the heart. It’s a gift the Maker gave us when he breathed his life into our lungs. But how often do we think about our imagination? How often do we pay attention to what we put into it and the fruit of that intake?

For writers, a holy imagination means everything because if our imagination isn’t sanctified, the things we create will be full of our own understanding (the flesh) and the world’s darkness. I am not talking about the elements of suffering and evil in our stories (those are essential). I am talking about the implicit beliefs that find their way into our stories because we haven’t devoted our hearts to God.

Those beliefs show up potently in our character’s development and conclusion about life. They affect the heart of our readers as they walk with our protagonists, (hopefully) thinking, feeling, and experiencing their journey. If our stories don’t end or point to the true, good, and beautiful of God, what are they worth? If our readers don’t experience his joy, hope, and love, what is our audience walking away with? They leave our stories empty instead of full, which I don’t think is the goal of anyone here.

So, how do we sanctify our imaginations or make them holy? Well, we have to start by redefining the word “holy.” Growing up, I defined holiness as “set apart,” which ultimately led to a lot of false conclusions about life. I lived apart from the world and those around me, thinking I had to create or make life work outside of every pre-existing system and faculty. “Being in the world and not of it” was impossible with this definition because if I am “set apart,” my devotion to God looks like removing myself entirely from the world, but that’s not our entreaty as friends of Jesus.

Josh Nadeau, creator of Every.Day.Saints, defines Holiness as “draw[ing] near to God and sit[ting] in his presence.” When I heard this, a piece of me fought back, but as he listed examples, the scales fell from my eyes.

The most potent example of this definition is the Holy of Holies. What qualities give the Holy of Holies its name? Does it exemplify “apart from the world and not of it”? No, in the Torah, the Holy of Holies exists inside the Israelite encampment. Later on in the story, it is the central part of the temple Jerusalem amidst the people. So, what is its defining quality? God’s presence resides there.

So, if Holiness is defined by God’s presence, how do we become holy? We draw near to God’s presence. He becomes the anchor for our vessel amidst the raging storms of the world. By residing in him, we can be “in the world, not of it.” And as we draw near to his presence, we become holy because the flesh and world cannot stand his spirit. They flee like rats when the lights come on. Being made holy takes a lifetime because so much of our hearts need healing, correction, and Jesus’ renewed life, but as we draw near to God and walk with him, every part of our hearts becomes holy, including our imagination.

As we become holy by drawing near to God, his presence infuses our imaginations. We see as he does. The work that flows from that stream is not holy because it is absent from the world (I mean, I hope my stories reach an expansive audience) but because it is full of God’s rich presence- his truth, goodness, and beauty.

When our audience experiences Him in our stories, they can’t help but wonder why it grips them; the truth is, every thread they pull from that question leads to the Maker’s heart. I hope that’s the kind of legacy I leave when all is said and done on this earth. 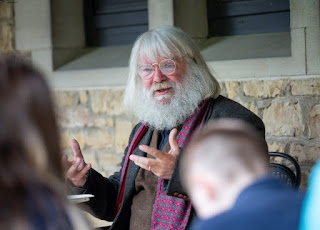 Ayodeji Malcolm Guite has a following among younger Christians. And no wonder! He is cool.

He’s an Anglican priest, poet, academic, and singer-songwriter. He plays the guitar in a blues band called Mystery Train, smokes a pipe, and rides his Royal Enfield café racer through the English countryside. He takes long prayer walks, and he speaks eloquently.

Guite is a member of a jazz-poetry performance collective called riprap. He has three cds out on Cambridge Riffs and itunes. He gives regular poetry/music performances in the UK and in the States.

Born in Nigeria to British expatriate parents, Guite earned degrees from Cambridge and Durham universities. His research interests include the intersection of religion and the arts. 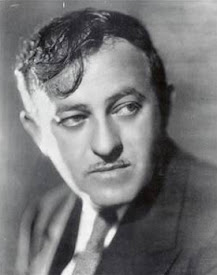 Over the holidays I watched more movies than I usually do, and I found myself bored by the generally dull and repetitious story lines.

Among the light-hearted romantic comedies, the formula is much the same: woman meets man who is either a nemesis or an unwanted suitor. The situation becomes complicated, forcing them to work together and get better acquainted. There is usually a further complication before the movie ends with a sweet kiss before a charming background and a fading scene of their tender embrace.

The Christmas Train (Hallmark) is one "romcom" that I enjoyed enough to watch more than once at the holidays. The plot holds surprises, and the performances by Dermot Mulroney, Kimberly Williams-Paisley, Danny Glover, and Joan Cusack are excellent.

The mystery movies offered more for the mind to consider. The Glass Onion (II) was exciting and entertaining. The unlikely scenario was carried off by good acting.

Some of the foreign films offered beautiful scenery and different narrative elements. I enjoyed 1000 Miles From Christmas and the campy 7 Women and a Murder. I also enjoyed In for a Murder, a Polish movie with an engaging plot and a lovable main character.

Overall, I have not been impressed with the quality of the movies. The plots are predictable. The dialogue is such that I get the impression that the actors sometimes are laughing inside or cringing.

Getting paid is probably the main concern of most screen writers. As the former American writer Ben Hecht once joked, "I'm a Hollywood writer, so I put on a sports jacket and take off my brain."

If only we had more like Hecht who wrote some of the most beloved American screenplays, including It's a Wonderful World (1939) and Angels Over Broadway (1940).

In Hecht's day of Nazis, War, and the KKK, people didn't want to watch movies showing extreme cruelty. Too many of that generation had seen or experienced it firsthand. Today, there is a demand for fast action, loud noises, masochism, horrific crimes, pornography, homosexuality, extraterrestrial threats, catastrophic end-of-world movies, and more. Every type of movie can be found in this global market. But not everything should be marketed to the public.

It is time for better screen writers. It is time for them to rise above the mediocre. Give us more complex plots involving inspiring people, more profound relationships, and more convincing dialogue.

A Blessed Tenth Day of Christmas

Christmas
by John Betjeman
The bells of waiting Advent ring,
The Tortoise stove is lit again
And lamp-oil light across the night
Has caught the streaks of winter rain
In many a stained-glass window sheen
From Crimson Lake to Hookers Green.

The holly in the windy hedge
And round the Manor House the yew
Will soon be stripped to deck the ledge,
The altar, font and arch and pew,
So that the villagers can say
'The church looks nice' on Christmas Day.

Provincial Public Houses blaze,
Corporation tramcars clang,
On lighted tenements I gaze,
Where paper decorations hang,
And bunting in the red Town Hall
Says 'Merry Christmas to you all'.

And London shops on Christmas Eve
Are strung with silver bells and flowers
As hurrying clerks the City leave
To pigeon-haunted classic towers,
And marbled clouds go scudding by
The many-steepled London sky.

And girls in slacks remember Dad,
And oafish louts remember Mum,
And sleepless children's hearts are glad.
And Christmas-morning bells say 'Come!'
Even to shining ones who dwell
Safe in the Dorchester Hotel.

And is it true,
This most tremendous tale of all,
Seen in a stained-glass window's hue,
A Baby in an ox's stall?
The Maker of the stars and sea
Become a Child on earth for me?

And is it true? For if it is,
No loving fingers tying strings
Around those tissued fripperies,
The sweet and silly Christmas things,
Bath salts and inexpensive scent
And hideous tie so kindly meant,

No love that in a family dwells,
No carolling in frosty air,
Nor all the steeple-shaking bells
Can with this single Truth compare -
That God was man in Palestine
And lives today in Bread and Wine.
at January 03, 2023 No comments:
Email ThisBlogThis!Share to TwitterShare to FacebookShare to Pinterest
Labels: Christmas poems, John Betjeman

Searching for a Lost Goat and a Lost Son 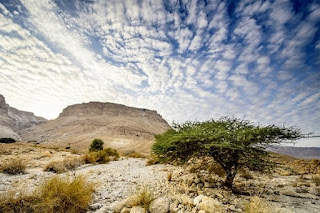 Yehuda Amichai, translated by Chana Bloch and Stephen Mitchell, from The Selected Poetry of Yehuda Amichai (University of California Press, 1996) 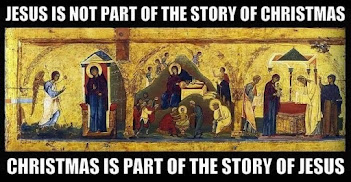 I lived in a small cottage by Kiser Lake in Ohio, near the "Pony Wagon" town of St. Paris. My closest neighbor, Esther McGraw, was one of the sweetest persons I have met. She was a young mother, a devoted wife, a phenomenal cook, and an aspiring writer. Once when I was very sick, she arrived at my house with a pot of delicious homemade chicken noodle soup. That soup and her prayers were restorative!

When she could, Esther would attend the Western Ohio Christian Writers monthly meetings at St. Mark's Episcopal Church in Sidney, Ohio. I helped to establish that group when I served as the Vicar of that parish.

Esther was always cheerful though she suffered from chronic renal problems and was frequently fatigued. I was very sad when I received the news of her death about 8 years after I moved away.

This Christmas poem, written by Esther, was originally published in the 1996 issue of Selah, an annual publication of the Western Ohio Christian Writers Guild.

Every Eye Upon Him

In a wooden manger a baby meekly rests

with every eye upon Him

and history is made.

Pale starlight for a compass

to kneel before the infant's stall.

while Joseph leans upon his staff

and history is made.

A bigger plan of God is set

to save us from our sins and death.

Over Bethlehem the twinkling stars announce

His story has begun.

My poem Mystic Exile was published in the Fall 2022 issue of God and Nature.

This is the first in a series of poems on religious topics. If you have a poem you would like to submit for publication, please submit it at aproeditor-at-gmail. Please put "Poem" in the subject line of your email.

Poems should "show not tell". They should be rich in images, allusions, metaphor, etc., and be related to a religious or Biblical topic.