A Pair of Wings 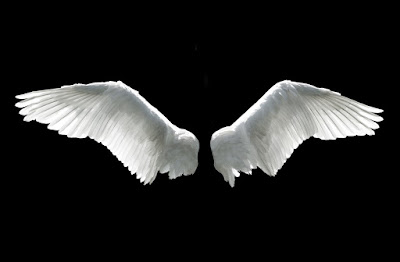 The dense trees around her seemed to be closing in, making her already rapid breath become shallow. She could hear people running behind her, trying to catch her.

Her eyes shot over to the left and she saw a figure running parallel to her. He was waving to her, trying to make her follow him. Harley experienced a rush of paranoia.

Should she follow him? Who was he? How does he know my name?

Something whizzed by her head and she shrieked. Harley ducked away and rushed for the boy to her left. He grabbed her arm and pulled her along with him as they hurried through the thickening woods.

“When I say jump, jump!” The boy exclaimed tiredly.

She felt his hand grip harder on her arm as they covered more and more ground.

Harley launched upward into the sky, squeezing her eyes shut. She expected to hit the grassy floors again, but instead, she continued to fall. Harley opened her eyes and let out a scream. They were falling off a cliff!

HE LED THEM RIGHT OFF A CLIFF!

She wanted to turn and chide the boy, but at that moment, all she could do was scream her lungs out. Abruptly, the chilly air changed and became deathly warm. Harley hit the ground with a pained grunt and she rolled across the ground. With a groan, she pushed herself up off the cobblestone street she had just fallen onto. Her back ached with a strange pain.

Harley spied her savior from the corner of her eye.

He was holding a knife as he neared her back. She scurried away, escaping the weapon was the first priority on her mind at that time.

“Don’t hurt me!!” Harley wept, terror sweeping through her veins and blinding her.

The boy’s voice assured. She calmed at his tender voice.

The ache in her shoulders was intensifying as he came close again. She watched him as he knelt and cut something on her back. Harley fell forward onto the stones. Something heavy was now hanging over her like an umbrella.

“What in the world…” She huffed.

Harley sat up and stretched her arms out and a soft feeling swept over her arms.

Her eyes widened when she spotted the wings draped down her back. The wings had mousey brown and gold feathers. Standing, Harley stroked the downy feathers. Never before had she touched a finer substance.

She looked back at the boy in confusion, “How did I…”

His sapphire blue eyes filled with sorrow, “You don’t remember?”

Her face flushed with confusion, “Should I?”

He stepped closer to her, “If you do not remember, I will help you remember.”

Harley stepped back, nearly tripping on the tails of her wings that were nearly touching the ground, “How can I trust you if I don’t even know your name?”

He opened and closed his mouth as a fish would, searching for words.

Finally, he spoke, “My name is Edwin. And I am your friend.”

Harley examined the boy for the first time. Edwin looked about her age, seventeen, maybe older. He was tall, maybe 5’ 8’’, much greater than her 5’ 2’’ frame. Edwin’s sapphire blue eyes were set off with his paler skin and ebony curly black hair. He had a chiseled jaw and broad shoulders. He had thin lips and Harley spied a small dimple on the right side of his mouth.

Harley had to admit that he was quite handsome.

She stepped up to him and held out her hand, “My name is Harley. It is fantastic to meet you, Edwin.”

Hope lit up his eyes as he took her hand, “And you, Harley.”

His hand was calloused but warm as if he was a dreadfully hard worker.

Harley pulled her hand away gently and moved her arms around, the wings on her back shrugged upward with the movement of her shoulders.

“So where did...um...you know,” Harley gestured to the extensions of herself.

Edwin smiled widely, “You were gifted with them, Harley.”

“Yes, very much gifted. It is very rare that a person of this kingdom is born with wings.”

Harley felt her heart skip a beat, “There...there are more like me?”

He nodded, “Of course! I mean, your kind is very rare, but-but do not worry, there are more.”

She turned away from Edwin to see where they had landed, “Where are we?”

“We are in Kartolia. The land of Gems,” He answered her.

Harley stepped toward the town, wanting to get a better look at things. She could hear the townspeople bustling about, calling out to each other, and some were singing. Edwin made no move to stop her, so she walked faster, the cobblestone odd under her bare feet. Harley was nearly running into the town square, now.

“Harley!” Edwin then cried out.

She skidded to a stop, tripping over the tails of her wings and rolling on the dusty road.

She stared up at the enormous blue sky, “Ow.”

Harley took his outstretched hand and stood, placing a hand on her shoulder, “I think...maybe?”

He started to chuckle.

Harley felt something spark in her chest and she whacked Edwin on the shoulder. He stumbled back as if hit by a supernatural force. Harley crossed her arms and glared at him, the wings on her back bristling in irritation.

“Don’t laugh at me, Edwin,” She snapped.

His face slacked but there was something in his eyes, a spark of emotion.

Harley's brow rose. “You have something to say?”

This time, Harley’s jaw slackened, “What did you call me?”

Harley unraveled her arms and placed her right hand on his shoulder, “No! I love it. Please, call me whatever you like.”

He gave a slight grin, his dimple appearing, “Alright.”

Harley nearly screeched when someone stroked her left wing.

Spinning, she spotted a little girl. Her bright green eyes stared up at her curiously while she was twirling a piece of hair around her tiny finger. Harley turned fully to the girl and knelt before her.

Harley smiled at her, “Nice to meet you, Elaine. My name is Harley.”

Harley felt her wing move with muscle memory and stretch out so the little girl could stroke the feathers.

Elaine reached out her fingers and gingerly touched the gold and brown feathers. She smiled as she became more comfortable with touching the wings. She giggled a bit when Harley lifted her opposite wing and tickled the child’s cheek. Harley could not help but notice the shocked and awed looks from the locals she was getting.

She stood and leaned over to Edwin, “Is this not normal?”

Edwin shrugged, “Most of the time, the winged-folk do not mingle with the people.”

Harley pinched her lips together, “Then I will be the first.”

She spied a group of older girls, maybe around fourteen, and she waved them over.

Their eyes were huge as they walked over and waited for her to speak.

“So, I have a question for you…” Harley started, they nodded attentively. “As you can see,” She picked at her torn clothing. “I am in need of a change of wardrobe. Do you think you could find me some stuff?”

They looked flabbergasted that Harley, a so-called winged-folk, was asking them for help.

Harley had never seen anyone run as fast as they did into the streets of the market. She then stepped over to a vendor who was selling food. Harley put her hands behind her back and peered at the choices.

Her long brown waves fell beside her cheeks as she pointed to a loaf of bread, “Could I please have one of those? And some cheese please?”

The tiny, elderly woman bobbed her head excitedly and handed her the food, “No charge.”

Harley flashed a bright, thankful smile before hurrying back over to Edwin, giving him the food.

“Be right back,” She told him.

Harley then hurried over to another vendor who was selling juices of all flavors.

She walked away with two jugs of orange juice and apple juice. When she returned to Edwin, the teenage girls were back. No sooner had Harley handed the juice over to Edwin, did the girls pull her into a building. The walls were covered in bolts of bright fabrics, with many different patterns. There were buttons, ribbons, and buckles lined up on the walls as well.

One of the girls with bouncy red hair called into the back room, “She’s here, Harmon!!”

Harley was expecting a middle-aged man, but all she saw come from the back room were two tufts of hair, sticking straight up into the air.

With a grunt, a little man hopped up onto the counter. It was a shame to say that the little man was not a lovely sight. His face resembled a prune, wrinkles everywhere, beady black eyes, and pinched lips. His monstrous ears were nearly a foot long with white, wiry hair at the tips of them. It was as if he had been pushed into a barrel to be shrunk.

“Ah! The winged-girl you were telling me about!” His voice sounded like nails on a chalkboard. “Come on over.”

Bright colors flashed around her. When Harley was standing before the tiny man, she had been magically clothed. She was now wearing a knee length, sky blue tunic with wine-colored trousers and boots.

“Splendid!” Harmon cried, then he grinned at her. “No charge.”

Harley laid on her back, staring up into the sky.

She and Edwin were laying in a grassy field. They had just eaten their groceries and were now just relaxing. She sighed in delight as her wings stretched outward. She heard Edwin stand and he offered her his hand.

Harley rose a brow as he pulled her from the grass, “How?”

Edwin stared at her in shock, “Just you know…” He started to flap his arms as if they were wings.

He gestured for her to try. She breathed out and her wings started to flap. No sooner had she flapped twice, and she was airborne. Harley let out a cry of excitement as her wings balanced her out in the winds. She gently twisted in a circle, and she stumbled into the grass below with a laugh.

Looking up, she saw Edwin. She gave him a grin, “Thanks.”

With a jerk, Harley’s hand shot up to hit the snooze button. She breathed heavily, looking around her room, trying to catch her bearings. She blew out to calm herself, and placed her hands on her eyes.

Honestly, Harley could not really believe those words.

Something poked her back, “Ow!”

Sitting up, Harley twisted around and her eyes grew.

On her mattress, laid a gold and mouse brown feather. Like from her wings in her dream. Harley picked up the feather before laying down. It was unbelievably soft. The gold strands sparkled like gems in the sunlight.

A small smile inched its way onto her lips. Holding the feather close, Harley closed her eyes. Edwin’s eyes filled her head.

Maybe it wasn't a dream after all.

"I would like to thank my mom, my dad, my best friends, my siblings, and God for helping me write this!”